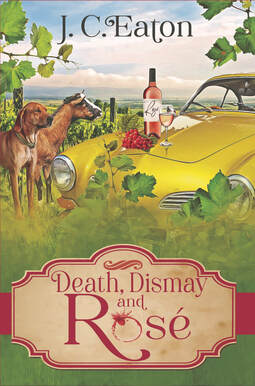 Shh! It's super secret! DEATH, DISMAY AND ROSE' is set for release on September 29, 2020, but we can't wait! So, we are sneaking in a special preview of chapter one for you! Once the buy links are in place with Amazon and B &N, we will post them. Meantime, sit back and enjoy this crazy romp in the Fingers Lakes of New York.

I flipped the kitchen wall calendar from May to June and shouted to Charlie, “Only thirty more days till my sentence is over.” The big, brindle Plott hound barely cast me a glance and continued to guzzle his kibble. My sentence referred to the year that I bestowed upon my sister, Francine, and her entomologist husband, Jason, to oversee the family winery while they traipsed through the Costa Rican rain forests in search of some elusive insect. All part of a grant Jason got from the New York State Agricultural Experiment Station at Cornell University.

Hooray for Jason. He got a grant and I got stuck dealing with more murders on the Seneca Lake Wine Trail than I could ever imagine in my real occupation as a romance and mystery screenwriter for a Canadian film company. I sublet my cozy apartment near Little Italy   in exchange for returning to our family farmhouse on Two Witches Hill in Penn Yan, New York, adjacent to our winery that bore the same name.

For years, Francine and I begged our parents to change the name of the winery but our parents, who are now comfortably enjoying retirement in Myrtle Beach, South Carolina, adamantly refused. Needless to say, Francine and I were teased relentlessly with all sorts of witch references. Of course the fact that I just had to dye my hair orange and purple for Halloween in my sophomore year didn’t help.

Now, with a Sharpie marker in one hand and my cup of morning coffee in the other, I reached over to circle June thirtieth. That’s when I spied the small moon images on the calendar pages and froze. I put the coffee cup down for fear of spilling it and took a closer look. Sure enough, under June twenty-first, beneath the words “summer begins” was a full moon.

Wonderful. As if I don’t have enough to deal with. Now the curse of the full moon on the summer solstice.

It was a ridiculous Penn Yan legend that probably got started two centuries ago when someone tried to cover up a murder. The curse was right up there with the “kiss of death” gravestone curse that still lingers over the Penn Yan Cemetery on Lake Road. That curse, I think, was meant to keep kids away from the grave markers but all it did was encourage them to dare each other to place a kiss on Elinor McLandon’s grave, circa 1802, and see if she would materialize and take them with her to the netherworld.

The solstice legend wasn’t all that different. Apparently, if a full moon occurred the same date as the summer solstice, the two witches, who once lived on our hill, would return from the dead and snuff the life out of someone in their sleep. The legend even specified the location – a five mile radius from the top of Two Witches Hill. A lot of lakefront in that area, including a popular vacation spot – Kashong Point. Idiotic nonsense, but still somewhat chilling in a bizarre sort of way.

I snatched my iPhone off the table and googled the last date of a summer solstice that coincided with the full moon. It was on a Monday in 1948. Rosalee Marbelton from Terrace Wineries was old enough to remember that date but she wasn’t living here back then. I groaned and tried to think. That’s when it dawned on me. Gladys Pipp might be able to help. Gladys was the secretary for the Yates County Sheriff’s Office and knew more about the goings on in the county than the deputies who were paid to deal with them.

Maybe I was being silly but if no one was smothered in their sleep back in 1948, I could poo-poo the whole thing and tell everyone else to do the same. I looked at the clock and it was a little after eight. Gladys was bound to be at work, especially on a Monday morning, so I phoned her.

“Norrie! I haven’t heard from you in a while. Is everything all right at the winery?” she asked once she finished with the usual spiel of “if this is an emergency, hang up and dial…”

“Great! Everything’s great. Thirty days and Francine will be taking over the helm. She needs to make more jellies and jams.”

Gladys was a regular fan of my sister’s assorted berry jams and, much as I hate to admit it, I used lots of those jars to eke information out of her when I needed it. Besides, she was the only friendly face in that entire office.

“I know this is a longshot, but you wouldn’t happen to know of anyone who was smothered to death in their sleep back in nineteen forty-eight, do you?”

“I need to keep my voice low. Listen, Deputy Hickman was in here a few minutes ago asking the same question. Said he wanted to be prepared in case the summer solstice curse reappears. Thinks someone might use it as a cover-up for them to commit murder. Had me pull up the obits from Google but it was worthless. Now he’s sending me to the Yates County Historical Society to go through their records. He even got a deputy to cover my desk while I’m gone. Can you believe it?”

“Yeah, I can. That curse originated with the two witches who lived on our hill centuries ago. Those kinds of tales can really scare the tourists right out of here or bring in throngs of loonies. Hmm, that gives me an idea. I’m meeting a friend of mine in Geneva for lunch today. I’ll drop by the Geneva Historical Society on my way home and see what their archives say. We can touch base later, okay?”

“Sounds good to me. Listen, I wouldn’t put a whole lot of credence into those things. They’re only good for one thing – late night ghost stories around the campfire.”

When I got off the phone with Gladys, I took a quick shower and got down to my real job. I had a screenplay due to my producer in two weeks. Actually, to the screenplay analyst who worked for my producer. Then, it would be bounced back to me for revisions and his little “just a thought” notes that were more annoying than anything else. I never knew if he wanted me to change anything or if he merely wanted to point things out.

At a little before eleven, I closed my laptop and headed to the tasting room before taking off to meet Godfrey Klein for lunch at Tim Horton’s. Godfrey was an entomologist who worked alongside my brother-in-law at the Experiment Station. He was also the only person who kept in touch with Jason and Francine via a satellite phone from Cornell. He was also the only person I ever kissed on the lips for no apparent reason other than a spur of the moment impulse. And while nothing like that happened again, mainly because I was, and still am, dating a lawyer who works in Geneva, I still have mixed feelings about Godfrey. Good thing I’ll be back in Manhattan in July. I like writing drama, not living it.

It felt wonderful to walk down the hill to our winery building in comfortable sandals instead of the heavy boots that seemed to be glued to my feet all winter long. Living in Penn Yan meant dealing with three seasons – snow, mud, and humidity. With mud season out of way, I could look forward to pesky mosquitos, no-see-ums, and frizzy hair. No wonder I moved to the city.

Surprisingly, the tasting room was busier than usual for a midmorning Monday on the first of June. Lizzie, our bookkeeper and cashier, lifted her wire-rimmed glasses from her nose and called out, “Good Morning, Norrie. Did you happen to notice the June calendar?”

“Shh! I’m referring to the summer solstice. It falls on a full moon. Not that I believe in all that mumbo-jumbo but—”

Just then, Glenda emerged from the kitchen with a full rack of wine glasses. She immediately put them on the nearest tasting room table and rushed over to me. “The full moon falls on the summer solstice. It’s not too late, Norrie,” she said as she brushed a long strand of pink and silver hair from her face. “Zenora and I can smudge this place in less than an hour. It’s wide open so we can move clockwise while we gently wave the sage stick smoke around the room. The winery can’t afford to take any chances. Especially since it sits right on the same property where those two witches lived.”

“That was centuries ago and none of us really know if they were witches in the actual sense of the word or maybe two hormonal sisters with bad attitudes.”  Like the one I’m about to have if this keeps up.

Glenda clasped her hands so tight I swore her knuckles were going to turn white. “If you must know, I have an awful premonition about this. And I’m not the only one. Zenora dreamt she saw a dead body floating on the lake.”

“Good. At least it wasn’t on our property. Tell your friend Zenora we can’t risk setting the place on fire with her ritual sage sticks. The séance last summer and the ear piercing chants around my house were bad enough. We’ll be fine. It’s only a ghostly legend meant to give little kids goosebumps.”

“I’m not so sure,” she replied. “Promise me you’ll think about it.”

“Oh, I’ll think about it. I have no choice. By the way, has anyone seen Cammy?” I stretched my neck and looked around the tasting room. Roger was at his table with four customers and Sam was chatting with a full crew at his table.

“In the kitchen,” Glenda said. “Loading the dishwasher. It’s been a busy morning. Glad she’s the tasting room manager and not me. Nonstop customers. Fred and Emma can deal with them at the bistro. Whoa, I’d better get a move on. A few more just came in the door.”

With that, Glenda grabbed the glass rack from the vacant table and proceeded to unload the glasses at her spot while motioning for the new arrivals to join her for a tasting.

“You know,” Lizzie said, “It might not hurt to appease her. Glenda’s a gentle soul and she really believes in all that new age stuff.”

“My sister and I believed in Santa Claus but my father didn’t go running out there to build a shed for the reindeer.”

“No, but your brother-in-law built one for that Nigerian dwarf goat of his.”

“Ugh. Alvin. Don’t remind me. Hmm, come to think of it, if those ghostly witches do appear on the solstice, one look at Alvin and they’ll be hightailing it off this hill like nobody’s business. Especially if he starts spiting.”

Lizzie laughed. “I tend to agree.”

Hope you enjoyed the preview!