We were tickled pick with the KIRKUS REVIEW that came in today for BROADCAST 4 MURDER, releasing October 2020.

A neurotic Chiweenie displays real detective skills.
Sophie "Phee" Kimball is a bookkeeper at a detective agency run by her boyfriend, Marshall Gregory, and Nate Williams, old friends from Minnesota who’ve moved to the Phoenix area, where Phee’s mother, Harriet, and her mystery-loving friends in Sun City West have involved her in many a mystery. The agency is currently investigating a perplexing case of inventory stolen from Home Products Plus that may draw on Phee’s accounting skills.

When a sewing-show host takes time off from Sun City West’s local radio station, Harriet and her pal Myrna Mittleson are thrilled by the chance to do a live talk show. The highlight of their first program on mystery novels turns out to be their on-air description of finding the bloody corpse of program director Howard Buell, stabbed to death with a pair of fancy scissors.

Nate and Marshall, who are often called in as consultants by the short-staffed local police, soon join Phee and Harriet’s gossipy network of friends on the case. A second murder suggests that the motive is either love or money. At length Phee realizes that the pop-up garage sales selling the stolen goods may be connected to the murders. In the end, though, it’s Streetman, Harriet’s Chiweenie, who helps solve the crimes.

Fans who like their mysteries with a healthy dose of humor will enjoy Eaton’s latest comedy of errors. 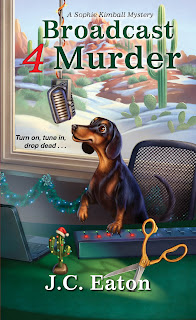