Just had to share this fabulous review from the Open Book Society! 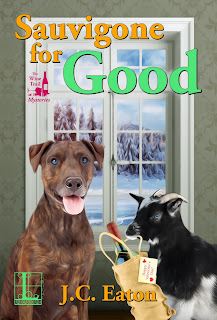 The descent of winter on the Finger Lakes means it’s time for the Wine Trail Association’s Chocolate and Wine Extravaganza. Unfortunately, for screenwriter-turned-reluctant vintner, Norrie Ellington, her Two Witches Winery is co-hosting the festivities. Norrie’s duties include wrangling the three international chocolatiers featured at the event—bitter rivals and industry influencers who can make or break Two Witches.

But the heated competition among the celebrity confectioners soon spills out of the professional arena, and before the Extravaganza is over, one of the cocoa pros is dead, last seen sipping a Two Witches’ Cabernet Sauvignon. With spirits souring at the Extravaganza and her winery on the line, Norrie must hustle to find the uncorked killer before Two Witches’ reputation is crushed once and for all. (from Goodreads)

This is a fabulously elaborate fourth offering in this series! I never knew a winery could be so … interesting! The characters are engaging, the winter setting in the Finger Lakes region of New York is a bit chilling but beautiful, and who can resist chocolate? The mystery was impossible for this reader to solve, which is the way I like it. There is much humor to go around; I especially enjoy how Godfrey handled a situation.

Norrie has overseen the family winery, Twin Witches, for six months. She is looking forward to the return of her sister Francine and hubby Jason from chasing bugs in Costa Rica. While she is still screenwriting for the made-for-tv movies station from Canada, the pressure is greater than ever because of her duties at the winery.

Six of the wineries were chosen to hold chocolate and wine pairings, including demos of three top European chocolatiers, in the days immediately preceding the first ever Chocolate and Wine Extravaganza. The winning chocolatier will win a huge sum of money, a book deal, writeups in major food magazines, and notoriety as the top chocolatier in the world. Each is a prima donna with special requirements. All stars come with a plethora of rumors, and this trio is no different. Two of the chocolatiers, Aletta and Stanislav, are in a relationship that had ended Aletta’s marriage. Jules, the third one, had a death threat, causing his assistant to quit, so he is bringing his nephew Earvin with him.

The opening night of the chocolate and wine fest arrives at Geneva on the Lake Resort, where the chefs are staying and the extravaganza will be held. Brad, the attorney Norrie is dating, is out of town on business, so she invites Godfrey, a friend and a coworker of her brother-in-law’s at Cornell Experiment Station, as her plus-one. Each of the six wineries where demos will be given have a specific wine selected to offer with the chocolate pairing, and each of those wines is featured at the ceremony. Overall the event goes well, but Jules has disappeared before the evening is through.
Early the next morning, Deputy Hickman is pounding on Norrie’s door. The crew at Geneva was clearing the parking lots early and found Jules dead in the parking lot. He was not dressed for the wintry outdoors and was still holding a wineglass. When checking the footage from the news networks the prior night, the last time Jules is seen before going outside is when he is given a glass of Cabernet Sauvignon, the wine Twin Sisters is providing for the events. He has a list in his pocket of the six featured wineries with a heavy line drawn through her winery. They will be doing tox screens, and she needs to be prepared to answer more questions.

The only thing as bad as having a dead body found at the winery months earlier is a potential rumor that their wine killed a world-acclaimed chocolatier! Knowing Deputy Hickman, he isn’t going to expend much energy on the investigation – or if it was even murder. Not only does she want to do what is best for the family winery, she also wants to prevent any further problems at the upcoming events. Earvin Is allowed to replace his uncle making chocolate creations; Twin Witches is one of the two wineries he will give demos at. He disappears as soon as the demo is over, and they are unable to locate them for his limo ride away. Threats, other challenges, and visitors from the chefs’ countries in this small area add to the suspense, and the suspect list!

I enjoyed getting to know Norrie, the winery staff, and owners of the other wineries better. I like Norrie, and I like seeing Norrie and Godfrey together. He has a great sense of humor, is very knowledgeable about the various insects he has studied over the years, and when Norrie needs him, he makes himself available.

This novel can be read as part of the series or as a standalone. The plot is incredible, very hard to even guess at who the real killer is. I now laugh at the notes I had with all the crazy scenarios I came up with, especially since most of them were too simple compared to the depth of intrigue that actually occurred. Having a big silly dog and seeing a bit of Norrie’s usual profession brought an added dimension, as did learning more about chocolate and – especially – the final chocolate designs the chocolatiers were to make. At the end, I was surprised at the motives for the murder, and completely blown away by the solutions. I highly recommend this amazing cozy mystery by this talented husband/ wife writing team!

*OBS would like to thank the publisher for supplying a free copy of this title in exchange for an honest review*
Posted by Ann I. Goldfarb at 3:48 PM